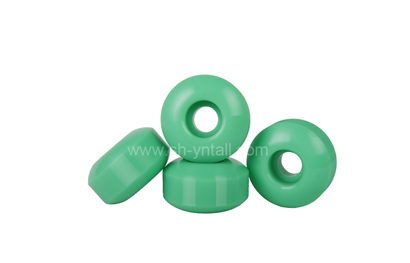 With the rapid development of roller skating, the "play" of roller skating has become more and more diverse. The various skating projects have their own characteristics and charms, which have attracted different skating enthusiasts. Skateboard PU wheels supplier will introduce them one by one. First, we introduce projects that have developed well in the country and have a broad mass base.

Casual roller skating is not a competition item, it is a free "play" without rules and restrictions. Anyone who loves roller skating wears roller skates to shuttle between streets, parks and squares. "Brush Street" is an important part of leisure roller skating. Street brushing refers to sliding on the street in roller skates, not in a fixed square, park, or venue.

In the competition, in order to reduce wind resistance, athletes will also wear streamlined, close-fitting sportswear. Speed skating is very similar to speed skating in the snow project.

Roller skating is a rare group confrontation event in roller skating, much like football or basketball. In roller skating competitions, a team has 5 players on the field, 1 of which is a goalkeeper. The playing field is generally 50 meters x 25 meters, 40 meters x 20 meters, or 30 meters x 15 meters. Rollerball is a fierce competition, so players and goalkeepers wear helmets and protective gear that can protect the whole body. Roller skating is developed from ice hockey and is a derivative project of ice hockey on land. The rules of the two are very similar.

Next: Advantages of Pu wheels