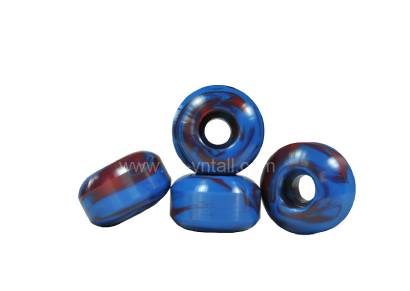 Do You Know the History of Skateboarding? (Part 1)

PU skateboard wheels supplier to share with you: On the other side of the Pacific Ocean in the late 1950s, descendants of Edison who were good at inventions turned the fantasy of ancient Divine people into a reality . In the early 1950s, the west coast of the United States was a place for hotspots. They use ordinary wood and expensive balsa surfboards for fun on the cusp.

By the mid-1950s, wooden surfboards were replaced by molded polyurethane foam and fiberglass. The mobility and durability of these new surfboards made surfing popular in the late 1950s.

Surfing failed to satisfy the local people's lifestyle of having fun anytime, anywhere, so they brought "surfing" to the land.

They call it "skateboarding," which is an extension of surfing on land. The former is limited by geographical and climatic conditions, while the latter has more freedom. Residents of the sunny Southern California beach community quickly built the world's first skateboard.

In today's opinion, that's a rather quaint invention: a 50 * 50CM board is fixed on a wheeled iron wheel. Even such a simple exercise device has attracted enough interest because it can provide the same psychological feeling that surfing brings.

However, due to its backwardness (the board is too bulky, inelastic, the steering mechanism is insensitive, the wheels are too slippery, etc.), skateboarding has not gained popularity as today. Seen on the skateboard video show Ban This.

Pu Wheels For Skate Board

Development of pu wheels for skate board:

The second generation of skateboards was born in 1962. It is composed of 15 * 60 cm board surface, roller steering bridge and plastic wheels made of pressed oak multilayer boards. Compared with the first generation skateboard, this skateboard is undoubtedly a leap in technology. However, the performance of this skateboard plastic wheel is still not ideal. His too little adhesion made the skateboard out of control when making a sharp turn; his low elasticity meant that the skateboard would stop even when facing a small obstacle and fell the skater. At the same time, his abrasion resistance is too poor. Nevertheless, this type of skateboard is still popular with skaters. After all, compared to the previous generation of skateboards, it has evolved to a large extent, and the relatively wide surface makes it easier for skaters to stand and manipulate.

In 1973, a skateboarder named Frank Nasworthy mounted polyurethane wheels on his skateboard for the first time and achieved unexpected results. He immediately started selling such wheels called "Cadillac" to his skate friends. This flexible wheel is not only abrasion-resistant, but also makes the skateboard turn safely and steadily, and easily run over small obstacles on the ground. This is how the third generation skateboard was invented. Because skateboarding is derived from surfing, the skateboarding culture of the early 1970s was basically a culture with the imprint of surfing. Skate enthusiasts and skate park builders initially built a lot of simulated surfing terrain. Later, they finally realized that because skateboards have less resistance and lighter weight than surfboards, they can build terrain that is more suitable for skateboarding than surfing to achieve greater speed, mobility and self-expression.

Previous: Do You Know the History of Skateboarding? (Part 2)

Next: Types Of Skateboards Popular Science Knowledge (Below)